The skin microbiota is the community of micro-organisms which live on the skin.

The skin: a vital organ

The skin is much more than just the body’s outer covering; it is an organ in its own right that is vital for life. It constitutes the boundary and the exchange surface between our internal environment and the external environment and for this reason is exposed to a wide range of external attacks and variations in conditions, to which it must continuously adapt. One of the skin’s many roles is to provide a barrier; a function once attributed simply to its structure and composition. However, more sophisticated scientific methods have revealed that this protective function is enhanced by an army of micro-organisms that are invisible to the naked eye, but present in their millions on every square centimetre of skin (1): the skin microbiota.

What are the components of this skin microbiota? What happens if this microbiota is disrupted? How can it be preserved?

The intestinal microbiota is a term most people are familiar with. The skin microbiota is similar in many respects: it consists of a diverse community of many types of micro-organism: bacteria, viruses, fungi and even parasites (belonging to the Acaridae family) (2). It is also known as the skin flora. This flora is found on and in the epidermis, and to a much lesser extent in the dermis.

The skin microbiota develops gradually with age and when mature it is comprised of, on average, 1,000 billion bacteria and 1,000 species of virus, parasite and fungus. The total number of genes in all these micro-organisms greatly outnumbers the genes in our human chromosomes.

The skin microbiota consists of 1,000 billion bacteria and 1,000 species of virus

The skin microbiota is specific to each individual since it varies quantitatively and qualitatively from one person to another. Variables such as age, gender, immune system, pH, temperature and even moisture levels will modify the composition of the skin microbiota. For example, since male skin is more acidic than female skin, the latter tends to have a higher microbial density (4). Similarly, the use of cosmetics and the production of hormones create inter-individual differences. However, two distinct sub-communities of microbiota can be found on the skin: “resident” flora and "transient” flora.

As its name indicates, the resident skin flora lives in total symbiosis with the skin. “Commensal” organisms are those which derive food or other benefits from their host without causing any illness. This flora forms the first line of defence against pathogenic micro-organisms, since their exclusive occupation of the binding sites sought by undesirable organisms prevents colonisation by the latter.

There is one bacterium which is particularly representative of this resident flora of the epidermis: Staphylococcus epidermidis (5), and the yeast Malassezia (5) which is found in areas rich in sebum (forehead, back, face and scalp).

Indeed, there are various different types of “microbiotic” habitat on the body, generated by variables such as skin thickness, the presence of creases, the density of hair follicles or sebaceous glands, etc. These various habitats can be grouped into three types of area on the body: sebaceous sites, moist sites and dry sites (see the figure below). The resident skin flora is present in all the layers of the skin according to recent studies (6): i.e. in the epidermis, dermis and hypodermis. 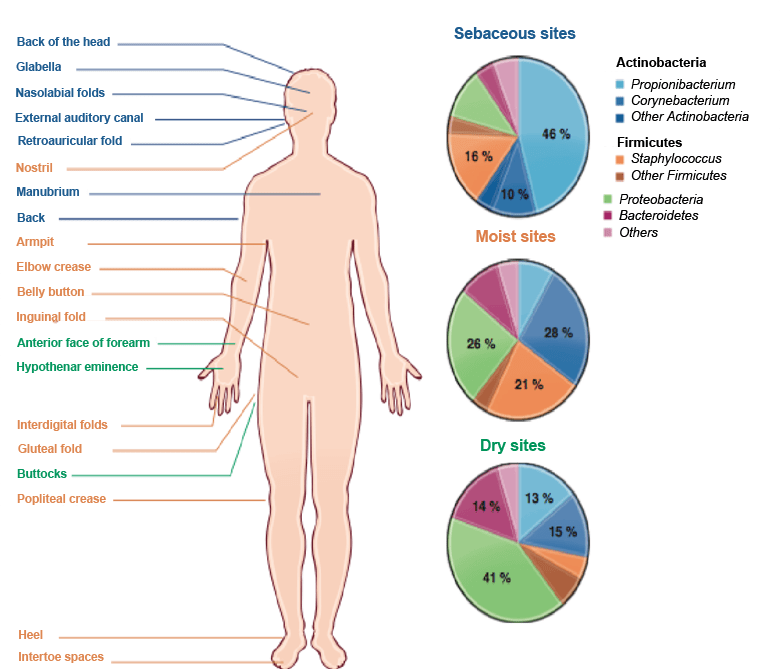 The transient flora does not develop and remains permanently on the surface of the skin; it varies over the course of the day as a function of the activities performed and of variations in the local environmental conditions. It may remain for a few hours, or a few days. Most of the micro-organisms which make up the transient skin flora are harmless and are known as saphrophytes since they feed on decomposing organic matter. This flora may also include opportunistic pathogenic bacteria that can cause disease if the host’s defences are weakened.

One of the most common transient species is Staphylococcus aureus, thought to be a causative factor in atopic dermatitis.

The skin and its microbiota: a protective combination

The micro-organisms present on the skin and which constitute the resident flora are not opportunistic: they perform very useful protective functions for the human body. Indeed, the skin microbiota performs a barrier role and protects its host (7).

Consequently, the host and the skin microbiota can work together to combat the invasion of pathogens and promote healing.

When a pathogen attempts to penetrate the body via the epidermis, several defence mechanisms come into play: 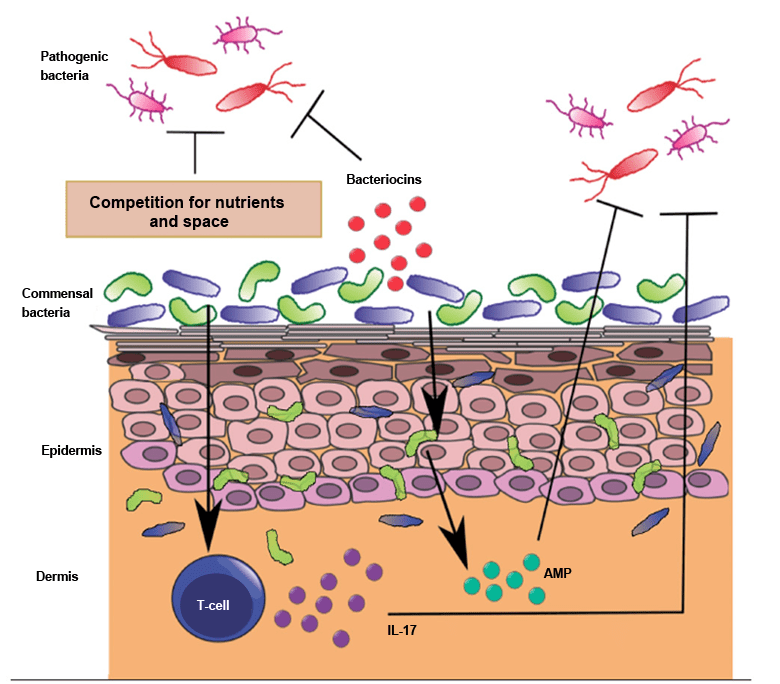 The skin microbiota has to continuously renew itself to survive the effects of natural desquamation (the process of skin cell creation and sloughing) and personal hygiene routines (8). Environmental factors have a significant influence on the effectiveness of the renewal of the microbiota.
Frequent washing can impair the hydrolipidic film and make it difficult for the skin flora to re-adhere to the skin. Moreover, the use of soaps whose pH is too high (greater than 7) will damage the existing microbiota and promote the proliferation of certain undesirable bacteria. For example, the bacterium Staphylococcus aureus, involved in atopic dermatitis, develops at a pH of over 7 (9).

The use of creams, lotions, cleaning products, deodorants, antibiotics or antiperspirants can have a significant impact on the composition of the skin's microbial communities, and this is particularly the case for the excessive and/or prolonged use of antibacterial soaps. The term “dysbiosis” is used to describe a microbiota which is out of balance.
Environmental diversity also plays a role: the skin microbiota of people who live in the countryside is much more diverse, in general, than those who live in urban areas due to the impact of the local environment. Greater exposure to a wide range of micro-organisms enhances the effectiveness of the immunity provided by the skin and reduces the risk of allergy. A significant exposure event in everyone’s life is birth. Children born by C-section are more likely to suffer from allergies, asthma and atopic dermatitis.
Advancing age also induces hormonal variations, which have repercussions on the composition of the microbiota.

There are, therefore, various ways to take care of your skin microbiota and prevent dermatological or systemic disease: