Atopic dermatitis is a form of eczema. This article provides useful information about this skin disorder whose prevalence is increasing in western countries.

When the skin it itchy… it might be eczema

Skin is the human body's largest organ. It consists of several layers of cells which create a barrier between the inside of the body and the external environment. It is also involved in the functioning of the immune system, both due to its component cells (Langerhans cells) and to the presence of the skin microbiota.

However, occasionally the skin's immune response can go into overdrive: in which case patches of red and itchy skin can appear and develop on various parts of the body.
Very young children, whose immune system is still establishing and maturing, are particularly vulnerable to these patches of red and very itchy skin; a condition more commonly known as eczema. 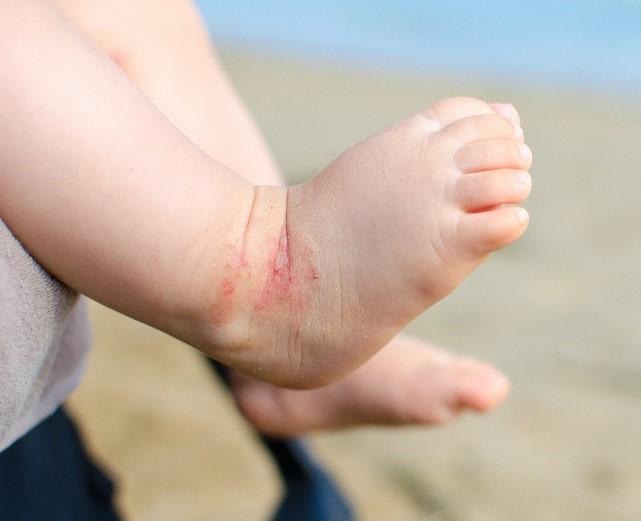 Eczema: a condition which has two forms

The etymology of the term eczema reveals that the word provides a good description of the condition. Eczema derives from the Greek word ekzein which means “to boil over or break out”. Patches of eczema are erythematous (erythema is redness which disappears when it is pressed) and dry and/or covered in small vesicles. These patches may appear for a specific reason, i.e. where the direct cause can be identified, or non-specifically, where the direct cause cannot be identified. This is the difference between the two forms of eczema:

This condition is an allergic reaction to a specific allergen. A good example of the trigger for this type of eczema is the wearing of jewellery. If the individual has an allergy to one of the metals, for example, in the piece of jewellery (such as nickel, a common allergen), a patch of eczema will appear on the area of skin in contact with the jewellery. The immune system’s response in cases of contact eczema is to synthesise specific antibodies - immunoglobulin E (IgE). When contact with the allergen is eliminated, the patches of eczema clear up.

Atopic eczema, more commonly known as atopic dermatitis, is a chronic inflammatory disease of the skin that results from a predisposition to develop allergies. One of the features of this disease is that the skin's immune response frequently goes into overdrive, for no apparent reason, and mobilises numerous immune cells: both those relating to innate immunity (present from birth) and to adaptive immunity (which develops as a result of exposure to the environment, which thus includes immunoglobulin E).
This immune response is thus non-specific, i.e. the appearance of a patch cannot be correlated to a particular event. Its course is characterised by flare-ups separated by periods of calm.

“For 90 % of people, the first episode of atopic dermatitis is seen before they are 2 years old”

This disorder is one of the manifestations of atopy, which is a particular susceptibility to developing abnormal immune reactions, notably allergic reactions. Atopy is a hereditary trait which is also associated with asthma and allergic rhinitis.
This hereditary trait is thus transmitted genetically, notably by a mutation of the gene which controls the synthesis of a component element of the skin barrier.

The outermost layer of the skin is the epidermis, and the outer surface of this layer is called the stratum corneum. This layer provides a barrier effect which protects the body from external attack. This skin barrier notably contains filaggrin; a protein which plays a role in keeping the skin hydrated and its acidity at the correct level (skin pH). Individuals with atopic dermatitis have a fault in the synthesis of this protein. This means that their skin barrier is impaired, which allows water to evaporate off and facilitates the penetration of potential allergens into the epidermis, dermis and into the body. This invasion appears to generate an inflammatory reaction.
In addition to the skin being less well protected and dryer, there are differences in the composition of the skin microbiota of people with atopic dermatitis compared with those who do not have this condition. 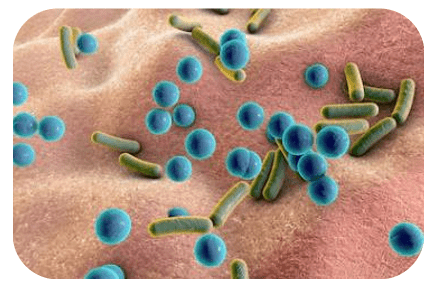 As described in this article, human skin is covered with 1,000 billion micro-organisms - better known as the skin microbiota.
This community of micro-organisms includes several species of bacteria, with a predominance of one species : Staphylococcus epidermidis. This bacterium has a protective effect on the future development of atopic dermatitis: when it is present in sufficient numbers it offers some protection against a flare-up. A different bacterium is seen during flare-ups: Staphylococcus aureus.

The bacterial diversity of the skin microbiota is lower in individuals with atopic dermatitis. A different bacterium is seen during flare-ups: Staphylococcus aureus. This over-representation appears to be linked to a reduction in the stratum corneum of the amount of defence protein s: defensins.

There are many consequences of this over-representation of Staphylococcus aureus:

When the flare-up settles down and a clear period begins, bacterial re-diversification is observed, with a reduction in Staphylococcus aureus.
These clear periods can be initiated by topical, corticosteroid-based treatments.

In addition to detecting a reduction in the diversity of the skin microbiota in children with atopic dermatitis, studies have revealed that at-risk neonates have a less well diversified intestinal microbiota. A cause-and-effect process has been suggested, since this intestinal dysbiosis precedes the onset of atopic dermatitis.

The use of probiotics and prebiotics to effect changes to the microbiota is thus a new treatment and prevention approach for atopic dermatitis.

Treatment and prevention of atopic dermatitis

During a flare-up of atopic dermatitis, a topical application of corticosteroids reduces the inflammation and the proliferation of Staphylococcus aureus.
To complement these effects, the application of emollients restores the skin barrier and helps to reduce inflammation.

The application of emollients containing fragments of probiotics, and prebiotics (substrates that promote the growth of bacteria) restores the skin barrier and maintains the balance of the skin microbiota. Their application, combined with corticosteroids, reduces the urge to scratch and the itchiness. As a preventive therapy, they act as protectors of the integrity of the skin barrier.

It is advisable to consult your prescribing doctor and/or pharmacist to get the best advice about the ideal combination of probiotics and prebiotics you can take to treat and prevent atopic dermatitis.