Our skin is more than just an outer covering. Its complex composition allows it to interact with the environment and perform vital functions. 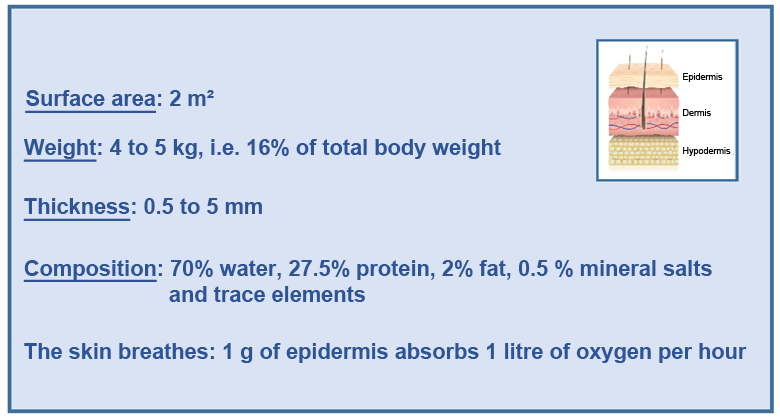 Skin is an organ just a few millimetres thick, with a heterogeneous composition. Despite being so thin, the skin is made up of a series of layers of cells, with each one performing different functions: the epidermis, dermis and hypodermis2.

This is the visible surface of the skin, the outermost layer. It is up to 1 mm thick and consists of a “living” epidermal layer of continuously renewing cells (keratinocytes) and a “dead” epidermal layer called the stratum corneum. This stratum corneum is made of cells that do not have a nucleus (corneocytes), and are replaced every 28 days by the natural desquamation process (whereby the outer layers of the epidermis slough off as small flakes). Lipids surround the cells of the stratum corneum and play an important structural role.

There are no blood vessels in the epidermis, but plenty of nerve endings which provide the skin's sensitivity to touch, variation in temperature, pain, etc.

The vitamin D present in the epidermis is the only vitamin that the human body synthesises. This vitamin plays an essential role in preserving our health.

Melanin is synthesised in the epidermis, as a product of a reaction triggered by the ultraviolet in sunlight, and is responsible for the colour of our skin3. As a result of exposure to sunlight, vitamin D is produced from cholesterol and is the only vitamin to be synthesised by the human body4. It promotes the supply of calcium to the bones, is involved in the correct management of pain and plays an important role in systemic immunity.

Immune system cells are also present in the epidermis. This layer of skin is covered with a hydrolipidic film, consisting of a mixture of sweat, water and sebum produced in the lower layer, the dermis.

The skin microbiota primarily resides in the epidermis.

The dermis is the thickest of the various skin structures, about 4 times thicker than the epidermis. It is separated from the latter by the dermo-epidermal junction, which plays an important role in providing the cohesion of the skin. The dermis gives the skin its suppleness and elasticity, since it contains cells known as fibroblasts which synthesise elastin, reticulin and collagen. As we age, less of these proteins are produced which leads to the appearance of lines, wrinkles and thinning of the skin.

The dermis also contains hyaluronic acid; well known in the field of cosmetics for its ability to retain water and prevent cells from losing water. It is rich in nerve endings and in blood and lymph vessels and also contains sebaceous glands (that produce sebum, which acts like a natural wax to protect the stratum corneum) and the sweat glands which let the body perspire. Hair follicles are also present in this zone, in addition to immune system cells which supplement those in the epidermis.

Hypo- means under, and thus the hypodermis is located under the dermis. It is the deepest layer of the skin. It is formed from fibrous compartments and fat cells, the adipocytes, which mechanically separate the skin from the muscle fascia. The hypodermis is where the body stores energy (e.g. in the form of fat, stored in the hypodermis over the stomach and under the chin), and insulates itself both thermally and physically. Indeed, it helps to regulate body temperature and to protect against impacts and mechanical loading. The thickness of the hypodermis varies as a function of the individual’s food intake.

Interestingly, there is no hypodermis in the skin of the eyelids and ears. Indeed, some topical medicines are applied to the ear to ensure higher levels of absorption.

To summarise, these various layers of cells work together closely to provide a range of vital functions:

However, to provide this protective function, the skin’s cell structure is not the only player involved. For a number of years now, micro-organisms that are invisible to the naked eye have received increasing attention as the subject of dermatological studies. For too long overshadowed by their cousins in the digestive tract, which form the intestinal microbiota, these skin micro-organisms have started to reveal their secrets and the veil is gradually being lifted on the skin microbiota.

Find out more about the skin microbiota in this article.