An overview of the digestive system

The food you eat passes through your digestive system. During its journey, it is broken down into simple compounds which the body can use as fuel. 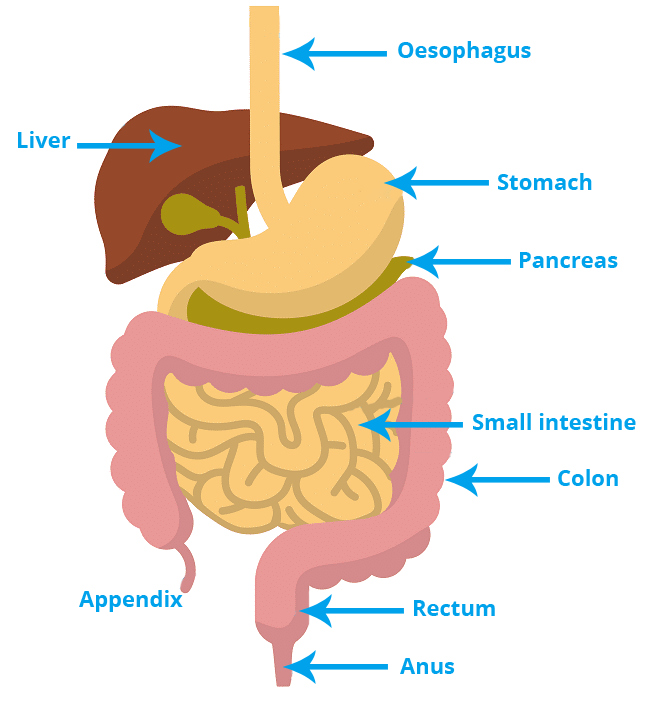 This muscular tube transfers food by peristalsis (or rhythmic “squeezing”) from the pharynx to the stomach. It is about 25 cm long and 2 cm in diameter.
At both ends, it is sealed by sphincters (circular muscles). These sphincters relax to open and allow food to pass through, and then close to prevent any reverse flow.

The liver and the biliary system

The liver is the largest internal organ in the human body and weighs about 1.5 kg. It accounts for 2.5 % of total body weight. The liver and biliary system produce bile, a fluid which aids digestion, particularly the digestion of fats.
The body produces about 1 litre of bile every day, half of which flows directly into the small intestine, with the other half stored in the gallbladder, primarily during the night.

The stomach is a digestive “bag”, located in the upper left-hand part of the abdominal cavity, which expands or contracts depending on how much food it contains. It is composed of four sections: the cardia, fundus, body (the largest part) and the pylorus which links to the first section of the small intestine, called the duodenum. Iron and fat-soluble molecules (such as alcohol and some medicinal products) are absorbed in the stomach. Peristalsis mixes the food with enzymes and hydrochloric acid (synthesised by the gastric glands, located in the stomach wall) and transfers the resulting liquid (called “chyme”) to the small intestine.
The vagus nerve and the sympathetic nerve system control both gastric secretions and the stomach’s motor activity.
Since we are now aware of the links between the gut and the brain, we better understand why, when we are stressed, our digestion is affected.

The pancreas is an organ of both the digestive system and of the endocrine system, and is located behind the stomach, in the upper part of the abdomen. The pancreas secretes digestive fluids containing enzymes into the duodenum (the first section of the small intestine) to help to break down the food into simpler compounds which can be absorbed by the intestine. The pancreas also secretes insulin, which passes into the blood to maintain a suitable blood glucose level.

The colon, or large intestine, is the final organ in the digestion process. It removes water from the non-digestible fraction of the food consumed by a process of absorption. The end result is faeces that can be eliminated from the body. The colon is about 1.5 metres long, and is made up of 6 distinct sections. Starting at the junction with the small intestine, these are: the caecum, ascending colon, transverse colon, descending colon, sigmoid colon and rectum.

The appendix is a small “pouch”, about 5 to 10 centimetres long, located near to the point where the small intestine meets the colon. Doctors are not sure of the exact function of this small organ, since its removal does not cause any particular symptoms. New research suggests that the appendix may offer a protected space in which bacteria that are beneficial to health can survive in the event of an intestinal infection, and from which the digestive system can be repopulated once the intestinal infection has been cleared.